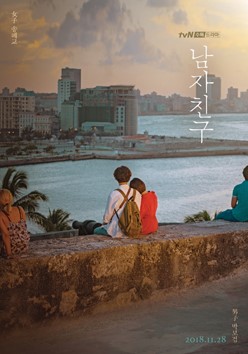 PCCW (SEHK:0008) HONG KONG, November 5, 2018 — Viu, a leading pan-regional OTT video service by PCCW Media Group, announces a regional deal with South Korea’s entertainment conglomerate CJ ENM on the highly anticipated new romance K-drama series Encounter, acquiring its exclusive OTT rights in Asia. The drama will be premiered on November 28, 2018 in Korea and will be streamed on Viu in Hong Kong, Malaysia, Indonesia, the Philippines, Singapore and Thailand, fully subtitled in local languages and as fast as four hours after telecast in Korea.

Produced by Korea’s top drama production house, Studio Dragon, a subsidiary of CJ ENM, which has made numerous hit series including What’s Wrong with Secretary Kim, Goblin and Bride of the Water God, Encounter boasts an all-star team with a renowned cast, director and script writer. The lead actress and actor of Encounter are prominent hallyu (“Korean wave”) celebrities Song Hye Kyo, best known for her leading role in the pre-eminent series Descendants of the Sun, and Park Bo Gum, famous for Reply 1998 and Love in the Moonlight. Helming the show is director and producer, Park Shin Woo, who also directed Jealousy Incarnate, as well as script writer Yoo Young Ah, from My Annoying Brother, Bel Ami and Entertainer.

Ms. Janice Lee, Managing Director of PCCW Media Group, said, “Our strategic collaboration with CJ ENM has grown since the launch of Viu to now cover 13 markets in Southeast Asia and the Middle East. Our collaboration brings the best quality and most popular Korean productions from CJ ENM to our highly engaged fans. Bringing Encounter to our Viu-ers in the region is an example of our commitment to offering the best and most extensive Asian content, including Korean, Japanese and Chinese content as well as Viu Original that we produce in local languages in Indonesia, Malaysia, Singapore, the Philippines, India and Hong Kong. With extensive content offerings, the video views on our platform have more than doubled to 1.2 billion in the first half of 2018 compared to the same period last year.”

Encounter is a gripping romance between Cha Soo Hyun (Song), an unhappy daughter of a prominent politician and the ex-wife of a conglomerate’s heir, and Kim Jin Hyuk (Park), who lives an ordinary life. Their fateful meeting marks the start of a love story that will rock their lives to the core.

Mr. Chul-yeon Kim, Senior Vice President of CJ ENM, said, “Since our collaboration with Viu started in 2015, we have been working closely to expand the offering of our quality content in the region. As a platform for Korean content with the most current and signature titles including both drama and variety shows, Viu is a great and effective partner to reach out to overseas audiences. Viu’s express subtitling, on-ground marketing and publicity as well as its fan insights in each market via its big data and experience allow our programs to access larger audiences through its highly engaged platforms. We appreciate Viu for its proactive local promotion to raise the profile of our shows.”

Ms. Helen Sou, Senior Vice President, Digital Media, PCCW Media Group, said, “Korean drama remains a top favourite among Asian viewers. Viu’s content collaborations with the top five Korean broadcasters — CJ ENM, KBS, MBC, SBS and JTBC — enriches and differentiates our content offerings, giving us an exclusive window to close to 90% of their latest simulcast dramas every year^. Since 2015, our collaboration with CJ ENM has expanded from drama to variety shows and tvN movies. Our content offering will continue to become more extensive, considering our simulcast program hours from CJ ENM alone have doubled up in the last few years.”

Mr. Se-jung Jang, General Manager of Studio Dragon, said, “Encounter is a culmination of our unflinching commitment to quality production, from a star-studded cast, over a month of intensive on-location filming in Cuba, in the Caribbean, to our expert producing director and script writer. By leveraging Viu’s OTT platform, we believe we can maximize our reach to viewers, enabling them to enjoy Encounter anytime, anywhere.”

Operating with both an ad-supported tier and a premium subscription tier with more features, Viu delivers premium Asian content in different genres from top content providers with local language subtitles as well as original production series under the ‘Viu Original’ initiative.

The service can be accessed via Viu app (available for free on App Store and Google Play) on connected devices, e.g. smartphones and tablets, as well as on web by logging into www.viu.com.

The media group of PCCW is a leading, fully integrated multimedia and entertainment group in Hong Kong.

The media group operates the leading pay-TV service in Hong Kong under the Now TV brand delivering both self-produced and licensed content to its customers using IPTV technology. Now TV offers more than 180 linear channels and on demand library of local, Asian and international programming. Its premium content can also be accessed via the Now Player app. It is also a leading producer of Chinese language news, financial news and sports programming in addition to Asian infotainment content which complements its wide portfolio of licensed movie and international television content. Now TV also offers the Now E entertainment OTT (over-the-top) platform with international and Asian dramas, movies and world-class sports events, which is designed to meet the needs of viewers with Millennial lifestyle.

The media group is also engaged in the provision of OTT video service under the Viu brand in Hong Kong and 15 markets in Southeast Asia, the Middle East and India. In addition, MOOV is a hugely popular music digital streaming service in Hong Kong.