Luce Celestiale: Under the Seven Stars

A DAY WITH BTS THROUGH THE LENSES
By Maria Izzabelle Chavez

Welcomed by the bright smiles of BTS in photos, PH ARMYs spent their day at SM North EDSA Skydome for an OT7 exhibit and fan gathering organized by ARMY Guild last March 25, 2018.

Luce Celestiale: Under the Seven Stars is an OT7 photo exhibit and fan gathering, which presented a collection of BTS’ photos from various fan sites. That morning, aside from the boys’ life-sized standees, a total of 250 photos gathered during fan meetings, fan signs, concerts, and selected fan art from 40 fan sites have been showcased in the exhibit. 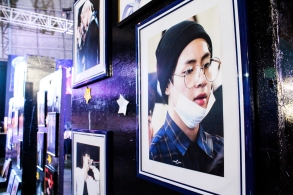 While some are taking photos, others are busy thinking of what merch to buy from the concessionaires present in the event. Photocards, posters, bookmarks, plushies, banners, everything that a true ARMY will want (or need, rather) is there. Also, a fansite-nim even traveled here to bond with the PH ARMYs and give away some candies and banners to those who approached her.

The fan gathering held that afternoon hyped up the fans because of the performances done by some of the guests. Fans who were watching were armed with their ARMY bombs and shouted out their fan chants in unison. Aside from that, games and raffles made everyone jump in their seats because of the great prizes that were given away during that day.

The pre-selling tickets were used to fund the LED birthday greeting of J-Hope and Suga in the streets of Manila while the final proceeds will go to UNICEF PH Marawi, UNICEF Love Myself and Gawad Kalinga under the name of BTS.

Following the success of Love Yourself: the Fan Gathering last year with an attendance of 500 ARMYs, Luce Celestiale is ARMY Guild’s biggest event so far with almost 1,200 attendees.

Luce Celestiale is a year-long event organized by the ARMY Guild, which aims to bring the OT7 exhibit to different provinces in the Philippines. Their next stop will be in Iloilo on May 26.